There are four stages in the administrative disability review process: initial application, reconsideration, ALJ (administrative law judge) hearing, Appeals Council review. Until recently, Pennsylvania was a part of a ten-state program initiated in 1997 that allowed claimants to bypass the second stage, reconsideration. Last summer, SSA announced plans to reinstate the reconsideration process in these ten prototype states citing a 2001 detailed study of the prototype program as well as a need for uniformity amongst all states. The announcement to end the prototype program drew sharp criticism from legislators and advocacy groups. Our own Senator Bob Casey called the reversal an “attack on individuals with disabilities” saying the extra step will make “obtaining disability benefits more complicated and more frustrating for Pennsylvanians.”  Despite the public outcry, reconsideration has now been reinstated in Pennsylvania as of April 20th. Before this reinstatement, if a claimant filed a disability application and was denied by the state agency, the next step was to appeal the determination and wait for a hearing before an administrative law judge (ALJ). But now, if an application is denied an appeal will send it right back to the state agency to be reviewed a second time by a different specialist. Unfortunately, national studies show that only 13% of the cases are approved at this level. If it is denied again, then an appeal will be a request for hearing before the ALJ. 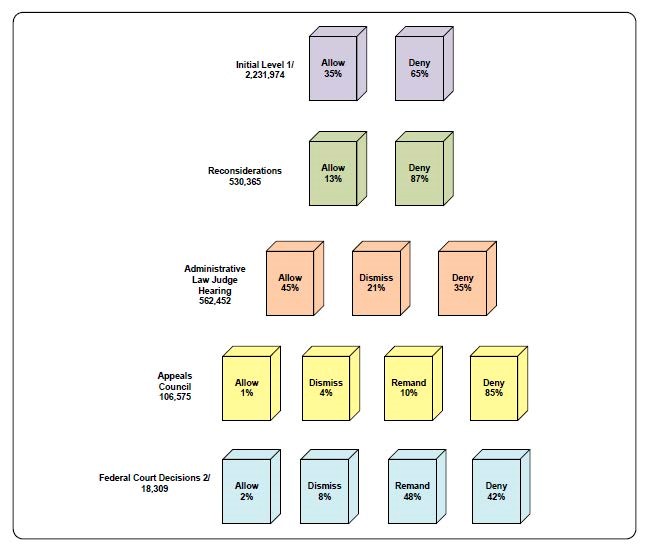 This FY 2018 SSA “waterfall chart” shows how many claims are allowed and denied at each of the four administrative stages.

Despite our dissatisfaction with the decision to end the prototype program, OBL is committed to giving our clients the best chance of success at the initial and reconsideration stages. If your initial application is denied, we will take quick action to review the determination and appeal the decision. Before we appeal at the reconsideration level, we will ask the following questions:

We understand what evidence the decision makers need in order to approve the case, and we assist our claimants in providing the information necessary to make the claim as complete as possible. By working with our team and responding with the updated information quickly, we are able to submit a strategic appeal at this stage.

If you have been denied disability benefits, we would like to speak with you about your claim. Your appeal deadline may be approaching, so please call immediately! 1-866-438-8773